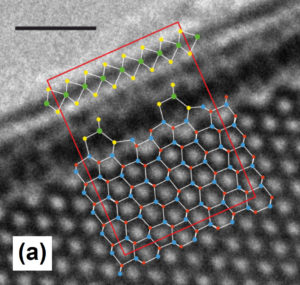 Core-shell nanowires is an interesting and perspective class of radially heterostructured nanomaterials where epitaxial growth of the shell can be realized even at significant core-shell lattice mismatch. In this study epitaxial hexagonally-shaped shell consisting of WS2 nanolayers was grown on f1100g facets of prismatic wurtzite-structured
[0001]-oriented ZnO nanowires for the first time. A synthesis was performed by annealing in a sulfur atmosphere of ZnO/WO3 core-shell structures, produced by reactive
DC magnetron sputtering of amorphous a-WO3 layer on top of ZnO nanowire array.
The morphology and phase composition of synthesized ZnO/WS2 core-shell nanowires were confirmed by scanning and transmission electron microscopy (SEM and TEM),micro-Raman and photoluminescence spectroscopy. Epitaxial growth of WS2(0001) layer(s) on f1100g facets of ZnO nanowire is unexpected due to incompatibility of their symmetry and structure parameters. To relax the interfacial incoherence, we propose a model of ZnO/WS2 interface containing WS2 bridging groups inside and use first-principles simulations to support its feasibility.