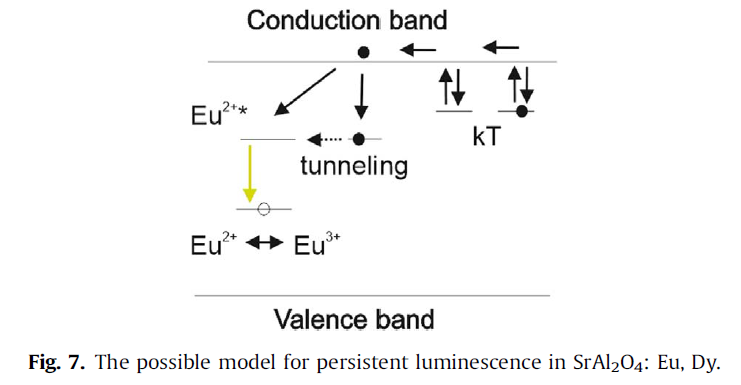 Luminescence of phosphorus doped crystalline α-quartz and phosphosilicate glass with content
3P2O5  7SiO2 was studied.Water and OH groups are found by IR spectra in these materials.The spectrum of lumines cence contains many bands in the range 1.5–5.5 eV. The luminescence bands in UV range at 4.5–5 eV are similar in those materials. Decay duration in exponential approximation manifests a time constant about 37 ns. Also a component in ms range was detected. PL band of ms component is shifted to low energy withrespect to that of 37 ns component. This shift is about 0.6 eV. It is explained as singlet–triplet splitting of excited state. Below 14 K increase of luminescence kinetics duration in ms range was observed and it was ascribed to zero magnetic field splitting of triplet excited state of the center.
Yellow–red luminescence was induced by irradiation in phosphorus doped crystalline α-quartz,
phosphosilicate glasses.The yellow luminescence contains two bands a t600 and 740 nm. Their decay is similar under 193 nm laser and maybe fitted with the first order fractal kinetics or stretched exponent.
Thermally stimulated luminescence contains only band at 600 nm. The 248 nm laser excites luminescence at 740 nm according to intracenter process with decay time constant about 4ms at 9 K.
Both type of luminescence UV and yellow were ascribed to different defects containing phosphorus.
P-doped α-quartz sample heated a t550 °C become opalescent. IR spectra related to water and OH
groups are changed. Photoluminescence intensity of all three bands,UV (250nm), yellow (600nm) and
red (740nm) strongly diminished and disappeared after heating to 660 °C. Radiation induced red
luminescence of non-bridging oxygen luminescence center (NBO) appeared in crystal after heat treatment. We had observed a crystalline version of this center (Skujaetal., Nuclear Instruments and Methods in Physics Research Section B Beam Interactions with Materials and Atoms. 2012; 286: pp.159–168).
Effect of heat treatment explained as sedimentation of phosphorus in some state. Keeping of treated
sample at 450–500 °C leads to partial revival of ability to create yellow luminescence center under irradiation.

Thermally stimulated luminescence (TSL) characteristics (TSL glow curves and TSL
spectra) are investigated in the 4-520 K temperature range for the X-ray irradiated at 4 K, 8
K, or 80 K single crystals of gadolinium and lutetium-gadolinium oxyorthosilicates. The
nominally undoped Gd2SiO5 and (Lu,Gd)2SiO5 crystals, containing traces of Ce3+, Tb3+, and
Eu3+ ions, and Ce3+-doped Gd2SiO5 and (Lu,Gd)2SiO5 crystals are studied. For the first time,
the TSL glow curves of these materials are measured separately for the electron (intrinsic,
Ce3+- or Tb3+-related) and hole (Eu3+-related) recombination luminescence, and the TSL glow
curve peaks, arising from thermal decay of various electron and hole centers, are identified.
The origin of the traps related to the TSL peaks is discussed, and thermal stability parameters
of the electron and hole traps are calculated.

It is obtained that, as grown, non-irradiated stishovite single crystals possess a luminescence center.
Three excimer pulsed lasers (KrF, 248 nm; ArF, 193 nm; F2, 157 nm) were used for photoluminescence
(PL) excitation. Two PL bands were observed. One, in UV range with the maximum at 4.770.1 eV with
FWHM equal to 0.9570.1 eV, mainly is seen under ArF laser. Another, in blue range with the maximum
at 370.2 eV with FWHM equal to 0.870.2 eV, is seen under all three lasers. The UV band main fast
component of decay is with time constant t¼1.270.1 ns for the range of temperatures 16–150 K.
The blue band decay possesses fast and slow components. The fast component of the blue band decay is
about 1.2 ns. The slow component of the blue band well corresponds to exponent with time constant
equal to 1771 ms within the temperature range 16–200 K. deviations from exponential decay were
observed as well and explained by influence of nearest interstitial OH groups on the luminescence
center. The UV band was not detected for F2 laser excitation. For the case of KrF laser only a structure
less tail up to 4.6 eV was detected. Both the UV and the blue bands were also found in recombination
process with two components having characteristic time about 1 and 60 ms. For blue band recombination
luminescence decay is lasting to ms range of time with power law decay t1.
For the case of X-ray excitation the luminescence intensity exhibits strong drop down above 100 K.
such an effect does not take place in the case of photoexcitation with lasers. The activation energies for
both cases are different as well. Average value of that is 0.0370.01 eV for the case of X-ray
luminescence and it is 0.1570.05 eV for the case of PL. So, the processes of thermal quenching are
different for these kinds of excitation and, probably, are related to interaction of the luminescence
center with OH groups.
Stishovite crystal irradiated with pulses of electron beam (270 kV, 200 A, 10 ns) demonstrates a
decrease of luminescence intensity excited with X-ray. So, irradiation with electron beam shows on
destruction of luminescent defects.
The nature of luminescence excited in the transparency range of stishovite is ascribed to a defect
existing in the crystal after growth. Similarity of the stishovite luminescence with that of oxygen
deficient silica glass and induced by radiation luminescence of a-quartz crystal presumes similar nature
of centers in those materials.